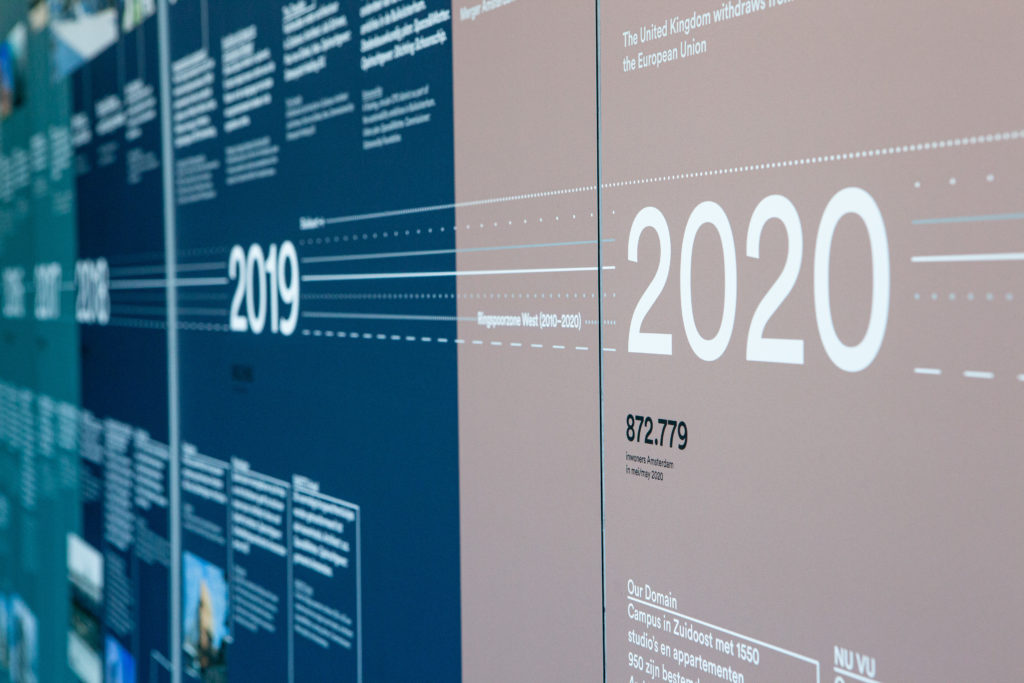 Whether it’s a rental agreement, tennis tournament, or demonstration, it seems that measures against the coronavirus are perceived as well-founded, but not set in stone. Just like the social distancing routing that has popped up in all kinds of places, people are searching to find their own way in the New Normal, which will never be taken for granted. We certainly don’t all experience this period in the same way. In any case, the coronavirus didn’t make it into the new Canon of the Netherlands, but it is mentioned on ARCAM’s new timeline. There’s much else to see there, too. Architectural recalibration #10: Housing floor plans.

The Canal District disappeared from the national Canon and the guest worker took its place. De Stijl went away, Orange fervour arrived. Willem Drees made way for Anton de Kom. The Netherlands is changing and—above all—insights are changing. At ARCAM, the old Canon, a panorama wall that charted the development of Amsterdam between the years 800 and 2000, has been replaced by a 2000–2030 Timeline of Amsterdam.

A critical review of the Timeline during the Amsterdam Architecture Days revealed that an incredible number of improvements have been made in Amsterdam between 2000 and 2020, in the city’s public space and green areas. Hanneke Kijne showed how all the large parks were renovated, the water quality rose to ‘swimmable’, the Gezonde Stad (Healthy City) organisation spurred action, sustainability awareness increased, and circularity became a generally accepted concept in policy and design.

Progress in the quality of living, on the other hand, showed a downward trend. The variation in floor plans and target groups decreased, the cost per square metre became three times as high, and houses became twice as small. Tourists took over the city and housing corporations were drastically limited in their powers. Residents’ increasing influence failed to compensate for the expanding space taken up by technical systems in homes. And all this within the context of a (global) trend that makes housing a matter for investors rather than a human right.

Fenna Haakma Wagenaar, Lyongo Juliana, and Marlies Rohmer together compiled a long list of abuses. Poor quality housing leads to bad neighbourhoods, which in turn leads to a high relocation rate, fear on the streets, and not living as you would like. You can’t bring your bike in the elevator, there’s no room for your shoes in the hallway, you can’t receive guests, and closed air circulation systems result in odours from the kitchen permeating the entire house. These are all shortcomings that are experienced daily, especially now.

We will use the Timeline in the upcoming months to talk with and about the city. What has happened in the last twenty years? What were the defining buildings or events in Amsterdam? What developments stand out? Online and offline, we collect all these stories, large and small, from both within and outside of architecture. As such, the period from 2020 to 2030 won’t just be a preview but also a collective wish list. We’ll put all of this knowledge into a definitive Timeline, and of course also into our programmes.